All dedicated and virtual servers come with an IPv4 address, as well as a /64 IPv6 subnet.

Note: This article is limited to showing you the corresponding Linux commands to illustrate the general concepts. For systems such as FreeBSD, a different configuration is necessary.

The main IPv4 address of a server is the IP that is originally assigned to the server and is configured in the automatic installations.

For IPv6, there is no clearly defined main address. In automatic installations, the ::2 from the assigned subnet is configured.

The particular link-local address is calculated from the MAC address using RFC 4291 and is automatically configured:

With older virtual server models (VQ/VX lines), there is no routing of the /64 IPv6 subnet. This is a local area network, whereby the ::1 of the subnet is used as the gateway. (See below).

Both individual addresses and addresses from subnets are generally routed via the main IP address. For the rest of this guide, let us assume that you have the following additional addresses/networks:

You can further divide, forward, or assign the allowcated subnets depending on your own preferences.

With IPv6, the first address (::0) of the subnet is reserved as the Subnet-Router anycast address. IPv6 does not use a broadcast address, so the last address is also usable (as opposed to IPv4).

For IPv6 on dedicated root servers and virtual servers from the CX line, the gateway is fe80::1. Since this is a link-local address, the explicit specification of the network adapter (usually eth0) is necessary:

For IPv4, the gateway is the first usable address of each subnet:

You can configure the assigned addresses as additional addresses on the network interface. To ensure the IP addresses are still configured after a restart, you need to adjust the corresponding configuration files of the operating system/distribution. You can find more details on the pages for Debian/Ubuntu and CentOS.

Alternatively, it can be forwarded within the server (e.g. for virtual machines):

The corresponding virtual machines have to use the main IP address of the server as the default gateway.

When forwarding the IP, make sure you have enabled IP forwarding:

If you have set up a separate MAC address for the IP address via Robot, then you need to use the corresponding gateway of the IP address.

Newly assigned IPv4 subnets are statically routed on the main IP address of the server, so no gateway is required.

You can assign the IPs as secondary addresses to the network adapters, just like single additional IPs:

You can forward them individually or as a whole.

Unlike with single IPs, you can also assign subnet IPs (to virtual machines) using DHCP. Therefore, you need to configure an address from the subnet on the host sytem.

The hosts on br0 use this address as the gateway. Unlike single IPs, the rules for subnets then apply; for example, you cannot use the network and broadcast IP.

For IPv6, the routing of the subnet on the link-local address leads to many possible options for further division of the subnet into various sizes (/64 up to and including /128). For example:

You can forward the entire subnet (such as VPN):

Or just a part:

From a single subnet, you can extract individual addresses, and you can forward the remainder. Note the prefix lengths:

Furthermore, you can use SLAAC (Stateless Address Autoconfiguration) in the connected hosts (br0) by installing radvd on the host. The configuarion in /etc/radvd.conf requires that the host possesses an address from <2001:db8:61:20e1::> on the bridge or TAP device:

Thus the hosts will automatically receive routes and addresses from the subnet. You can see this within the hosts:

Use with virtualization with the routed method 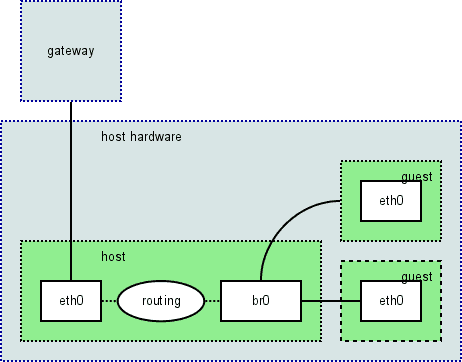 In the routed method, you configure a new network interface on the server which one one or more VMs are connected to. The server itself acts as a router, hence the name.

The advantage of the routed method is that traffic has to flow through the host. This is useful for diagnostic tools (tcpdump, traceroute). It is also necessary for operating a host firewall which performs the filtering for the VMs.

Some virtualization solutions create a network interface per unit (like Xen and LXC), you may need to couple them with a virtual switch (e.g. via a bridge or TAP interface).

Use with virtualization with the bridged method 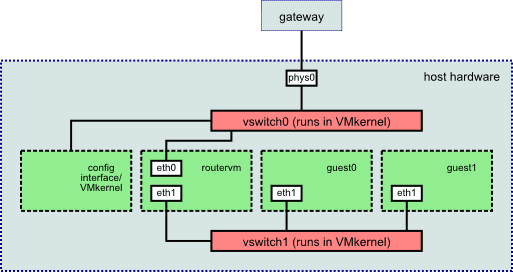 The bridged method describes the configuration which enables a virtual machine to be bridged directly to the connecting network just like a physical machine. This is possible only for single IP addresses. Subnets are always routed.

The advantage of the bridged solution is that the network configuration is usually simple to implement because no routing rules or point-to-point configuration is necessary. The disadvantage is that the MAC address of the guest system becomes "visible" from the outside. Therefore you must give each individual IP address a virtual MAC address, which you can do on Robot. You need to then route the IPv6 subnet via this new MAC. (An icon next to the subnet in the Robot allows you to do this).

You can find setup guides for different distributions here: