UEFI (Unified Extensible Firmware Interface) is the replacement for the legacy BIOS firmware.

Which servers are supported?

At this time (2020/03/19), all servers which we currently have in our new dedicated root server portfolio support a stable UEFI boot including the Hetzner Rescue System.

Which benefits does UEFI have?

UEFI gives customers several advantages, like using large disks partitions over 2 TB with GPT, a flexible pre-OS environment and backward/forward compatibility, and also an easier way to setup a dual boot. Also, if a failed drive has to be replaced, the drive only needs to get re-mounted into the RAID. There is no need to install the bootloader on the harddisk: the bootfiles are on a separate FAT formatted partition, which is in a RAID in our images. For more information about this, see EFI system partition

Participate in the UEFI Beta

Customers can open a ticket on the administration console Robot. Navigate to the correct server and open a support ticket. In it, ask the support team to enable UEFI on the server. Important note: There will be a short outtage when the support team enables the UEFI support on the server. Also, the installed operating system must have UEFI support, and you need an EFI system partition to boot the system.

The CSM (Compatibility Support Module) will be disabled completly, so you will not be able to a UEFI-CSM compatible system.

Check if the system is already running in UEFI mode

In Linux, there are two ways to check if the system is running in UEFI mode.

Running efibootmgr on a UEFI-enabled system will give you an output like this:

Running efibootmgr on a non UEFI-enabled system will give you an output like this:

If the path /sys/class/firmware/efi/ exists, then the system is UEFI-enabled.

Open msinfo32 (System Information) and check under System Summary -> BIOS Mode to see if it says UEFI or Legacy. 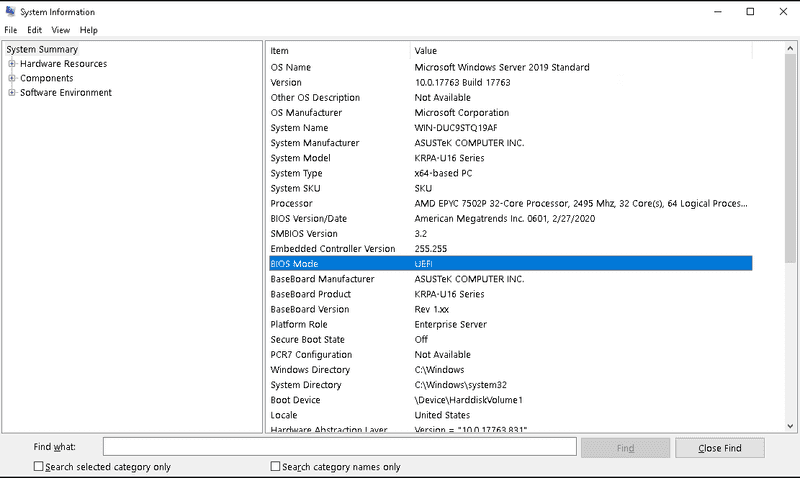 We know about the benefits of Secure Boot and also that some customer want to use Secure Boot. You can enable it, but we do not support it. If you enable it, the rescue system and automatic installation will not be available anymore, and the system might not be bootable anymore (Linux-based distributions).

As UEFI boot is still in the BETA stage, we cannot assure that a hardware-RAID controller is compatible with UEFI boot.