All other models are not certified by VMware, but in most cases, you can run them with VMware vSphere/ESXi.

(All information is subject to change) 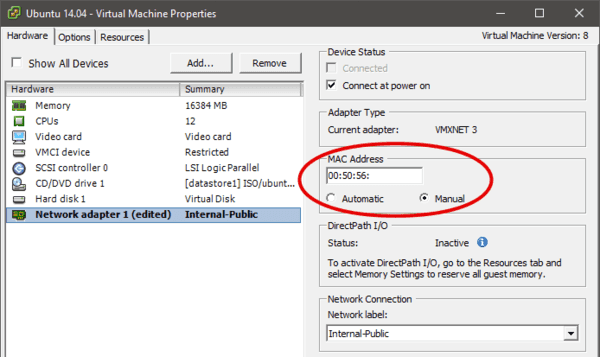 IMPORTANT Since IPv6 subnets are routed to link-local addresses (MAC-based), it is only possible to use IPv6 in a limited way (meaning on a single VM).

The confirmation email of the subnet contains (for example) the following information:

You do NOT get a separate MAC for each IP from a subnet.

All servers come with a /64 IPv6 subnet. To see which IPv6 subnet your server has, please check the IPs tab of the server in Robot.

If you ordered your server before February 2013, you can order this subnet for free via Robot and it will be automatically activated.

The IPv6 subnet is routed to the default link-local address (which is derived from the MAC address) of the main IP. Using Robot, you can switch the routing of the IPv6 subnet to the link-local address of the virtual MAC (in other words, the additional single IP). You can do this on Robot using the same symbol which is located next to additional single IPs. It's the same symbol you use to request virtual MAC addresses. The host system, meaning the ESXi itself, receives no IPv6 address. This is neither necessary nor possible because ESXi cannot work with a fe80::1 gateway.

In order to use these IP addresses in virtual machines, you need a router VM supplemented by an additional virtual NIC from the new subnet. The subnet itself requires a new vSwitch in ESXi which all VMs in the subnet will be connected to.

The network card type for the router VM should not be VMXNET2 or VMXNET3; otherwise, the TCP performance can be very bad. As a workaround, you can disable LRO in the VM with disable_lro=1. You can find more information on this bug here: http://www.vmware.com/support/vsphere4/doc/vsp_esxi41_vc41_rel_notes.html

After an upgrade to VMware ESXi 5, this issue may appear again. You can address this issue by disabling Large Receive Offload (LRO) on the ESXi host:

Reboot the ESXi host to activate these changes.

If you experience connection problems in systems with Realtek network cards, then you can solve this under certain circumstances by deactivating offloading and activating polling. However, this also reduces the performance.

Preparations in the vSphere client 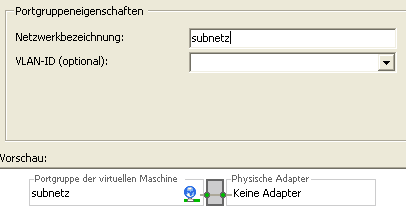 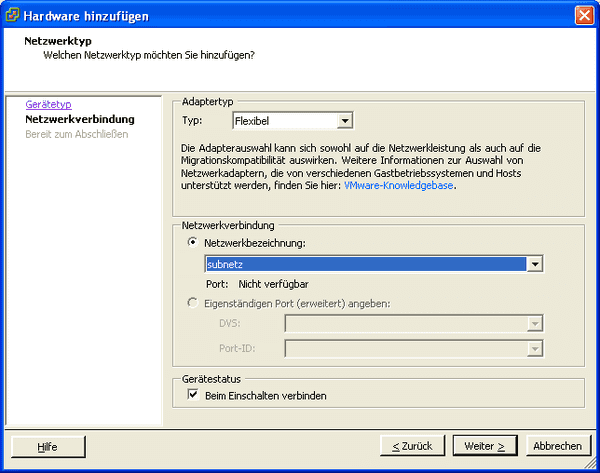 The networking overview should show the following: 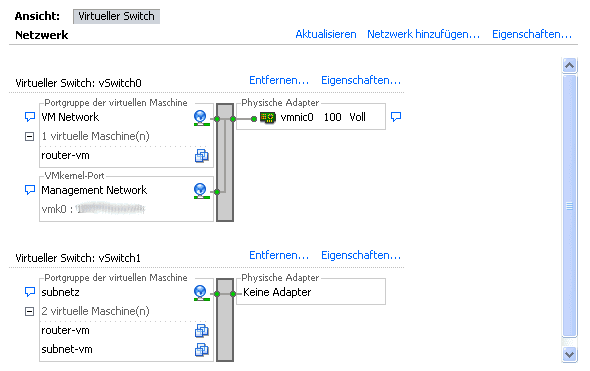 Configuration of the Router VM

The router VM is now connected to both networks, and you can use it as a gateway for virtual machines in the subnet. Don't forget to activate IP forwarding in the kernel:

To make this persistent across reboots, add the following line to /etc/sysctl.conf

The virtual machines should now be accessible (via SSH for example) via their assigned IPs.

Then, you should see the following screen: 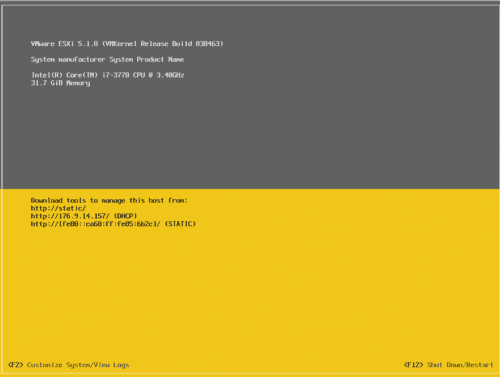 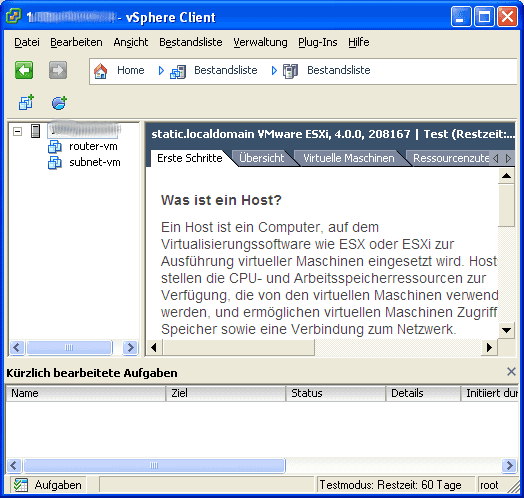 For additional information regarding ESXi and its usage, please refer to the official website

You can only do the installation of updates in the free version via the console or via VMware Go. An update can be several hundred megabytes, which can take a long time with a standard DSL connection, which is why the following guide can help. Follow this guide at your own risk. There is no warranty or guarantee that it will work!

Before you start, you need two things. First, you need SSH activated access. And second, the system needs to be in maintenance mode. You can activate this using:

First of all, you need to download the VMware-ESXi-5.1.0-799733-depot.zip update from the VMWare Updates Page and save it on the ESXi host.

Once all the VMs have been shut down and the system has entered the maintenance mode via vim-cmd hostsvc/maintenance_mode_enter, you can use one of two ways to install the update. The following command refreshes the system and removes all the packages that are not included in the update. This is equivalent to a new installation.

Or, you can only update the packages containted in the update to their new versions, leaving all other packages intact.

Finally, you need to reboot the system. When you turn the VMs on for the first time after the reboot, you might see a message noting that the VM was copied or moved. This happens because the UUIDs get changed during the update. You can safely select "VM was moved" in this situation. See also: VMware Help Page

After you have transferred the patches onto the system, you can install them. It is important that you enter the full path name, eg.:

After a reboot, you need to exit from the maintenance mode:

For the 3ware controller, there is both a CIM Provider as well as a CLI. You can use the 64-bit CLI for Linux from version 9.5.2 onwards.

Note: 3ware controllers are only supported by ESXi 5.0 via an external driver.

For Adaptec controllers, you need to manually install the CIM Provider and the CLI (arcconf). You also need to have an up-to-date version of the driver. You can find an installation guide on the Adaptec website (PDF).

You can start monitoring by installing remote ARCCONF via a Windows/Linux system.

LSI provides a CIM/SMIS provider. After you've finished the installation, the hardware monitoring page in the vSphere client displays the status of the RAID. However, you can only get an active alarm in the paid version and when running vCenter.

Or you can install the command line tool MegaCLI, which you can also use to manage the RAID controller. You can use a script to automate the display of status information. But you need to run this script and notifications from another server.

Parallel operation of onboard controller/hardware RAID

During the installation, ESXi only sees one type of storage, so either the onboard SATA controller or an additional RAID controller. If drives are connected to both, then the hardware controller is prioritized, and the drives connected to the onboard controller are invisible. By manually loading the appropriate kernel module, you can still use these drives.

To have this module loaded automatically during start, you need to add the line above to /etc/rc.local and /sbin/auto-backup.sh.

In the event of a hardware (ex)change, especially the motherboard, it should be noted that the ESXi host retains its original MAC address. This leads to issues. The switch will not automatically forward the correct new main IP to the server, as the MAC address that is being broadcast is incorrect. You need to reset the MAC address via the ESXi shell. There are several approches for doing this, listed in the following VMWare Knowledge Base Article. The most elegant solution is when the ESXi host automatically recognizes the new MAC address when changing platforms and uses that. You can use the following command for that:

Either perform this command before the platform change or, if the change has already happened, there are two options:

With either option, you need to do a restart afterwards. You can initiate this via the console:

After a restart, the MAC address should be set correctly and you can verify this in the ESXi shell with the following command:

The new MAC address should show up next to the main IP.